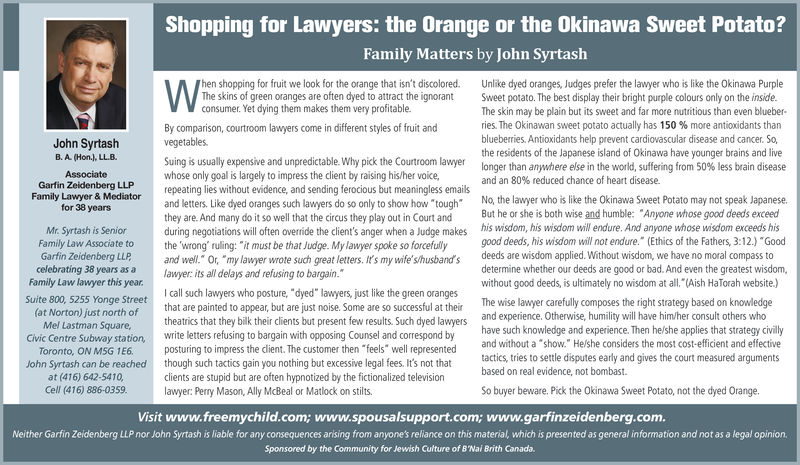 Shopping for Lawyers: the Orange or the Okinawa Sweet Potato? Family Matters by John Syrtash hen shopping for fruit we look for the orange that isn't discolored. The skins of green oranges are often dyed to attract the ignorant consumer. Yet dying them makes them very profitable. Unlike dyed oranges, Judges prefer the lawyer who is like the Okinawa Purple Sweet potato. The best display their bright purple colours only on the inside. The skin may be plain but its sweet and far more nutritious than even blueber ries. The Okinawan sweet potato actually has 150 % more antioxidants than blueberries. Antioxidants help prevent cardiovascular disease and cancer. So, the residents of the Japanese island of Okinawa have younger brains and I longer than anywhere else in the world, suffering from 50% less brain disease By comparison, courtroom lawyers come in different styles of fruit and vegetables. Suing is usually expensive and unpredictable. Why pick the Courtroom lawyer whose only goal is largely to impress the client by raising his/her voice, repeating lies without evidence, and sending ferocious but meaningless emails and letters. Like dyed oranges such lawyers do so only to show how "tough they are. And many do it so well that the circus they play out in Court and during negotiations will often override the client's anger when a Judge makes John Syrtash B. A. (Hon.) LL.B Garfin Zeidenberg LLP Family Lawyer & Mediator for 38 years d an 80% reduced chance of heart disease. No, the lawyer who is like the Okinawa Sweet Potato may not speak Japanese. But he or she is both wise and humble: "Anyone whose good deeds exceed his wisdom, his wisdom wil endure. And anyone whose wisdom exceeds his te such great letters. It's my wife's/husband's eed are wisdom applied. Without wisdom, we have no moral compass to without good deeds, is ultimately no wisdom at all."(Aish HaTorah website.) Mr Syrtash is Senior Family Law Associate to the'wrong ruling: "it must be that Judge. My lawyer spoke so forcefully g00d deeds, his mszom wil not endure. Ethics o Garfin Zeidenberg LLP celebrating 38 years as Family Law lawyer this yea Suite 800, 5255 Yonge Street determine whether our deeds are good or bad. And even the greatest wisdom, awyer: its all delays and refusing to bargain I call such lawyers who posture, "dyed" lawyers, just like the green oranges that are painted to appear, but are just noise. successful at their theatrics that they bilk their clients but present few results Such dyed lawyers and experience. Otherwise, humility will have him/her consult others who Some are so successful at their The wise lawyer carefully composes the right strategy based on knowledge Mel Lastman Square, Civic Centre Subway station, rite letters refusing to bargain with opposing Counsel and correspond by ed have such knowledge and experience. Then he/she applies that strategy civilly and without a "show." He/she considers the most cost-efficient and effective tactics, tries to settle disputes early and gives the court measured arguments posturing to impress the dlient. The customer then "feels" well represent though such tactics gain you nothing clients are stupid but are often hypnotized by the fictionalized television lawyer: Perry Mason, Ally McBeal or Matlock on stilts. that John Syrtash can be reached at (416) 642-5410 So buyer beware. Pick the Okinawa Sweet Potato, not the dyed Orange. Visit www.freemychild.com; www.spousalsupport.com; www.garfinzeidenberg.com Neither Garfin Zeidenberg LLP nor John Syrtash is liable for any consequences arising from anyone's rellance on this material, which is presented as general information and not as a legal opinion. Sponsored by the Community for Jewish Culture of B'Nai Brith Canada