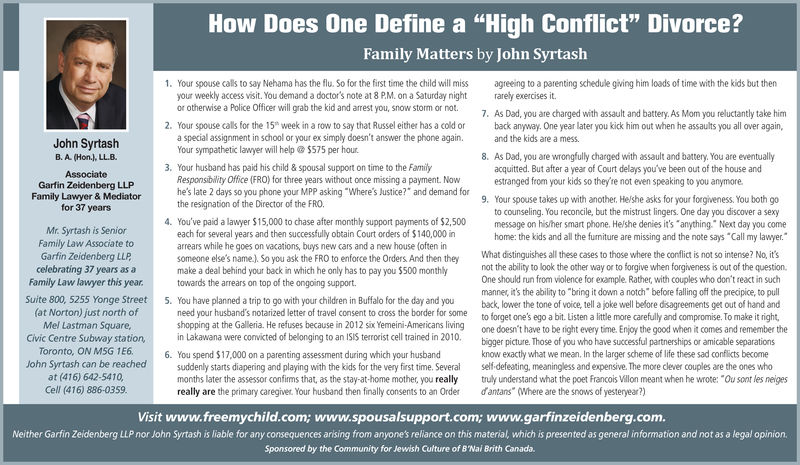 How Does One Define a "High Conflict" Divorce? Family Matters by John Syrtash 1. Your spouse calls to say Nehama has the flu. So for the first time the child will miss agreeing to a parenting schedule giving him loads of time with the kids but then your weekly access visit. You demand a doctor's note at 8 PM. on a Saturday night or otherwise a Police Officer will grab the kid and arrest you, snow storm or not. rarely exercises it. . As Dad, you are 7. As Dad, you are charged with assault and battery. As Mom you reluctantly take him 2. Your spouse calls for the 15" week in a row to say that Russel either has a cold or back anyway. One year later you kick him out when he assaults you all over again, and the kids are a mess John Syrtash B. A. (Hon.) LL.B a special assignment in school or your ex simply doesn't answer the phone again. Your sympathetic lawyer will help$575 per hour. 8. As Dad, you are wrongfully charged with assault and battery. You are eventually 3. Your husband has paid his child & spousal support on time to the Family acquitted. But after a year of Court delays you've been out of the house and Responsibility Office (FRO) for three years without once missing a payment. Now he's late 2 days so you phone your MPP asking "Where's Justice? and demand for the resignation of the Director of the FRO. estranged from your kids so they're not even speaking to you anymore Garfin Zeidenberg LLP Family Lawyer & Mediator for 37 years 9. Your spouse takes up with another, Helshe asks for your forgiveness. You both go to counseling. You reconcile, but the mistrust lingers. One day you discover a sexy 4. You've paid a lawyer $15,000 to chase after monthly support payments of $2,500messageon his/her smart phone. He/she denies it's anything. Next day you come Mr. Syrtash is Senior each for several years and then successfully obtain Court orders of $140,000 in arrears while he goes on vacations, buys new cars and a new house (often in someone else's name.). So you ask the FRO to enforce the Orders And then they make a deal behind your back in which he only has to pay you $500 monthly towards the arrears on top of the ongoing support. home: the kids and all the furniture are missing and the note says "Call my lawyer. What distinguishes all these cases to those where the conflict is not so intense? No, it's Garfin Zeidenberg LLP celebrating 37 years as Family Law lawyer this year Suite 800, 5255 Yonge Street (at Norton) just north of Mel Lastman Square, Civic Centre Subway station, Toronto, ON MSG 1E6 John Syrtash can be reached not the ability to look the other way or to forgive when forgiveness is out of the question. One should run from violence for example. Rather, with couples who don'treact in such mannex, it's the ability to "bring it down a notch" before falling off the precipice, to pull k, tht of voice, tell a joke well before disagreements get out of hand an of travel consent to cross the border for some to forget one's ego a bit. Listen a ittle more carefully and compromise. To make it right, 5. You have planned a trip to go with your children in Buffalo for the day and you shopping at the Galleria. He refuses because in 2012sx Yemeini-Americans living in Lakawana were convicted of belonging to an ISIS terrorist cell trained in 2010. one doesn't have to be right every time. Enjoy the good when it comes and remember the bigger picture. Those of you who have successful partnerships or amicable separations 6. You spend $17,000 on a parenting assessment during which your husband know exactly what we mean, In the larger scheme of life these sad conflicts become sddenly starts diapering and playing with the kids for the very first time. Several sf defeating, meaningless and expensive. The more clever couples are the ones who at (416) 642-5410, Cell (416) 886-0359 months later the assessor confims that, as the stay-at-home mother, you really understand what the poet Francois ilon meant when he wrote: "Ou sont les neiges really are the primary caregiver. Your husband then finally consents to an Order datans" (Where are the snows of yesteryear?) Visit www.freemychild.com; www.spousalsupport.com; www.garfinzeidenberg.com Neither Garfin Zeidenberg LLP nor John Syrtash is liable for any consequences arising from anyone's reliance on this materia, which is presented as general information and not as a legal opinion. Sponsored by the Community for Jewish Culture of B'Nai Brith Canada