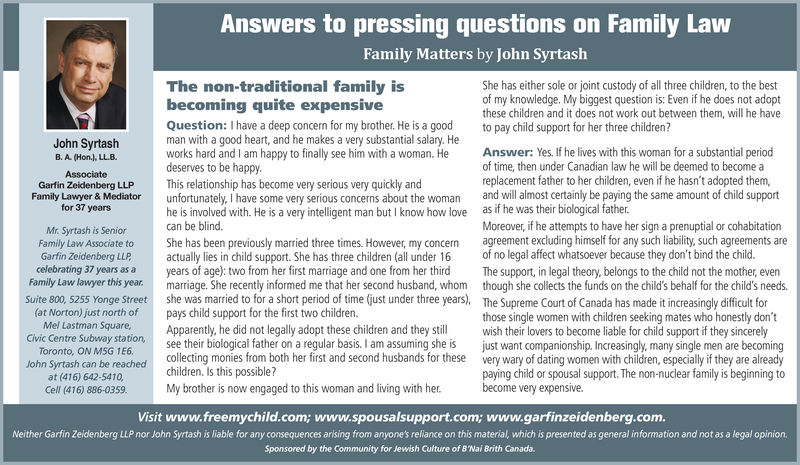 Answers to pressing questions on Family Law Family Matters by John Syrtash The non-traditional family is becoming quite expensive Question: I have a deep concern for my brother. He is a good man with a good heart, and he makes a very substantial salary. He She has either sole or joint custody of all three children, to the best of my knowledge. My biggest question is: Even if he does not adopt these children and it does not work out between them, will he have topay child support for her three children? John Syrtash (Hon.), LL.B. orks hard and I am happy to finally see him with a woman. He Answer: Yes. If he lives with this woman for a substantial period B. deserves to be happy This relationship has become very serious very quickly and of time, then under Canadian law he will be deemed to become replacement father to her children, even if he hasn't adopted them, Garfin Zeidenberg LLP Family Lawyer & Mediator for 37 years unfortunately, I have some very serious concerns about the woman and will almost certainly be paying the same amount of child support he is involved with. He is a very intelligent man but I know how love as if he was their biological father. Garfin Zeidenberg LP actually lies in child support. She has three children (all under 16 of no legal affect whatsoever because they don't bind the child. Suite 800, 5255 Yonge Street she was married to for a short period of time (just under three years), The Supreme Court of Canada has made it increasingly difficult for Mr Syrtash is Senior can be blind. Moreover, if he attempts to have her sign a prenuptial or cohabitation She has been previously married three times. However, my concern agreement excluding himself for any su celebrating 37 years as ayears of age): two from her first marriage and one from her third spport, in legal theory, belongs to the child not the mother, even Family Law lawyer this year marriage. She recently informed me that her second husband, whom though she collects the funds on the child's behalf for the child's needs. (at Norton) just north of pays child support for the first two children. Apparently, he did not legally adopt these children and they still those single women with children seeking mates who honestly don't wish their lovers to become liable for child support if they sincerely Mel Lastman SquareA Civic Centre Subway station Toronto, ON MSG 1E6 M6r biological father on a regular basis. I am assuming she is just want companionship. Increasingly, many single men are becoming John Sytash canbrachd collecting monies from both her first and second husbands for these very wary of dating women with children, especially if they are already paying child or spousal support. The non-nuclear family is beginning to at (416) 642-5410, children. Is this possible? Cell (416) 886-0359. My brother is now engaged to this woman and living with her ecome very expensive Visit www.freemychild.com; www.spousalsupport.com; www.garfinzeidenberg.com Neither Garfin Zeidenberg LLP nor John Syrtash is liable for any consequences arising from anyone's rellance on this material, which is presented as general information and not as a legal opinion. Sponsored by the Community for Jewish Culture of B'Nai Brith Canada.