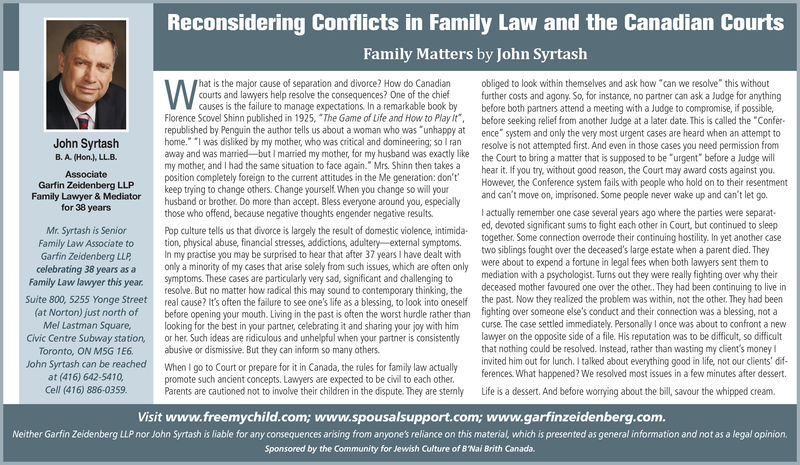 Reconsidering Conflicts in Family Law and the Canadian Courts Family Matters by John Syrtash hat is the major cause of separation and divorce? How do Canadian obliged to look within themselves and ask how "can we resolve" this without courts and lawyers help resolve the consequences? One of the chief rtr costs and agony. So, for instance, no partner can ask a Judge for anything causes is the failure to manage expectations, In a remarkable book by before both partners attend a meeting with a Judge to compromise, if possible Florence Scovel Shinn published in 1925, "The Game of Life and How to Playit. before seeking relief from another Judge at a later date. This is called the Confer- republished by Penguin the author tells us about a woman who was "unhappy at ence home. I was disliked by my mother, who was critical and domineering: so I ran away and was married but I married my mother, for my husband was exactly like mother, and I had the same situation to face again." Mrs. Shinn then takes a position completely foreign to the current attitudes in the Me generation: don't keep trying to change others. Change yourself. When you change so will your husband or brother. Do more than accept. Bless everyone around you, especially those who offend, because negative thoughts engender negative results system and only the very most urgent cases are heard when an attempt to n Syrtash resove is not attempted first. And even in those cases you need permission from the Court to bring a matter that is supposed to be "urgent" before a Judge will hear it. If you try, without good reason, the Court may award costs against you. However the Conference system fails with people who hold on to their resentment and can't move on, imprisoned. Sorme people never wake up and can't let go. Garfin Zeidenberg LLP Family Lawyer & Mediator 38 years Pop culture tells us that divorce is largely the result of domestic violence, intimida- tion, physical abuse, financial stresses, addictions, adultery- external symptoms. In my practise you may be surprised to hear that after 37 years I have dealt with l actually remember one case several years ago where the parties were separat ed, devoted significant sums to fight each other in Court, but continued to sleep together. Some connection overrode their continuing hostility. In yet another case wo siblings fought over the deceased's large estate when a parent died. They were about to expend a fortune in legal fees when both lawyers sent them to celebrating 38 years as a only a minority of my cases that arise solely from such issues, which are often only to mediation with a psychologist. Turns out they were really fighting over why their symptoms. These cases are particularly very sad, significant and challenging resolve. But no matter how radical this may sound to contemporary thinking, the deceased mother favoured one over the other. They had been continuing to live in Suite 800, 5255 Yonge Street real cause?It's often the failure to see one's life as a blessing, to look into oneself the past. Now they realized the problem was within, not the other, They had been (at Norton) just north of bfore opening your mouth. Living in the past is often the worst hurdle rather than fighting over someone else's conduct and their connection was a blessing, not a curse. The case settled immediately. Personally I once was about to confront a new aer on the opposite side of a file. His reputation was to be dificult, so dificult looking for the best in your partner, celebrating it and sharing your joy with him abusive or dismissive. But they can inform so many others. promote such ancient concepts. Lawyers are expected to be civil to each other, Civic Centre Subway station, or her. Such ideas are ridiculous and unhelpful when your partner is consistently that nothing could be resolved. Instead, rather than wasting my client's money l invited him out for lunch. I talked about everything good in life, not our clients' dif ferences What happened? We resolved most issues in a few minutes after dessert. John Syrtash can be reach When I go to Court or prepare for it in Canada, the rules for family law actually Parents are cautioned not to involve their children in the dispute. They are stemly Life is a dessert. And before worrying about the bill, savour the whipped cream. Visit www.freemychild.com; www.spousalsupport.com; www.garfinzeidenberg.com Neither Garfin Zeidenberg LLP nor John Syrtash is liable for any consequences arising from anyone's rellance on this material, which is presented as general information and not as a legal opinion. Sponsored by the Community for Jewish Culture of B'Nai Brith Canada.