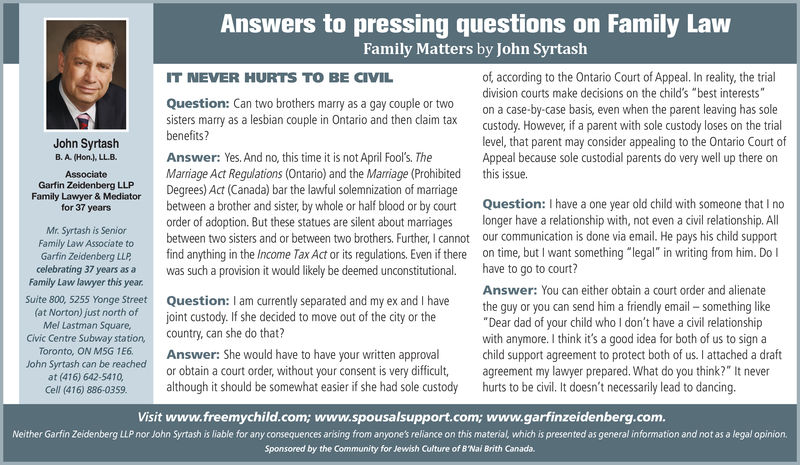 Answers to pressing questions on Family Law Family Matters by John Syrtash of, according to the Ontario Court of Appeal. In reality, the trial division courts make decisions on the child's "best interests IT NEVER HURTS TO BE CIVIL Question: Can two brothers marry as a gay couple or two benefits? sisters marry as a lesbian couple in Ontario and then dlaim taxcustody. However, if a parent with sole custody loses on the trial level, that parent may consider appealing to the Ontario Court of Appeal because sole custodial parents do very well up there on John Syrtash Answer: Yes. And no, this time it is not April Fool's. The Marriage Act Regulations (Ontario) and the Marriage (Prohibited his issue Degrees) Act (Canada) bar the lawful solemnization of marriage between a brother and sister, by whole or half blood or by court Question: I have a one year old child with someone that I no order of adoption. But these statues are silent about marriages longer have a relationship with, not even a civil relationship.All between two sisters and or between two brothers. Further, I cannot our communication is done via email. He pays his child suppot Garfin Zeidenberg LLP Family Lawyer & Mediator for 37 years Mr. Syrtash is Senior Garfin ZeidenbergPdanything in the Income Tax Act or its regulations. Even if there on time, but I want something "legal" in writing from him. Dol celebrating 37 years as a have to go to court? Answer: You can either obtain a court order and alienate the guy or you can send him a friendly email- something like "Dear dad of your child who I don't have a civil relationship with anymore. I think it's a good idea for both of us to sign a child support agreement to protect both of us. I attached a draft agreement my lawyer prepared. What do you think?" It never was such a provision it would likely be deemed unconstitutional. Suite 800, 5255 Yonge Street t Norton) just nort Civic Centre Subway station lohn Syrtash can be reached Question: I am currently separated and my ex and I have joint custody. If she decided to move out of the city or the country, can she do that? Answer: She would have to have your written approval or obtain a court order, without your consent is very difficult, Cell (416) 886-03 altough it should be somewhat easier if she had sole custody hrts to be civil. It doesn't necessarily lead to dancing. Visit www.freemychild.com; www.spousalsupport.com; www.garfinzeidenberg.com Neither Garfin Zeidenberg LLP nor John Syrtash is liable for any consequences arising from anyone's rellance on this material, which is presented as general information and not as a legal opinion. Sponsored by the Community for Jewish Culture of B'Nai Brith Canada.